We believe it’s time for a new kind of leader. Human-centred leaders who together will create the world we need for our shared future. Leaders who are examples of what’s possible when we commit to the deepest levels of humanity and responsibility in the ways we live, lead and work.

We believe that in order to be fit for the future and not just today, leaders need to evolve, both as individuals and collectively as leadership communities.

The challenges they’re leading into over the next few years – and beyond – demand that they understand themselves and each other more deeply, along with the key roles they play as the influencers and creators of the living human system that is their organisation and its stakeholders.

An organisation may be represented as a two-dimensional structure of lines and boxes in a traditional organisational chart, but the reality of it as a social ‘human system’ is much more complex and dynamic. As is the ever-evolving context in which its people live, lead and work.

Leaders are key players in this ‘human system’ of relationships, a system filled with unconscious psychological contracts and potential for drama, but also with creative possibility. It’s a system they shape with the mindsets, beliefs and stories they use to make sense of themselves, of each other and of the world; with the energy, attitude, and emotional state they bring into each and every interaction; and with the behaviours they demonstrate in their moment-to-moment leadership.

In a world that is changing increasingly quickly, humans remain the same in a multitude of fundamental ways, and have done for tens of thousands of years. The core our physiological, psychological, and sociological humaness is something we need to understand more deeply if we are to make the most of the opportunities we have before us.

We believe that starting from a place of empathy, compassion, and understanding, both of Self and others, is fundamental to leading in a world of constant and convergent change where one of the few constants is our shared humaness.

In our philosophy, human-centred leadership means placing being human at the centre of leadership and its development.

In our experience there are THREE important elements to human-centred leadership that, if developed, will help leaders be fit for the future, not just today:

Humanistic – We believe the time has come to move beyond the mechanistic, ‘Taylorist’ model of management and toward a form of leadership inspired by humanistic psychology and philosophy and grounded in 21st century context, not in the two hundred year-old, Industrial Age thinking of the 19th.

Taking a humanistic approach requires an understanding of human needs for both security and growth. It means valuing wisdom not just knowledge, demonstrating care and compassion over a need to command and control, working toward wholeness while respecting human agency, seeing the organisation as a system and its work in the world as a force for good, creating positive outcomes for all stakeholders.

Collaborative – The work required of leaders at the core of an organisation is increasingly collaborative. This way of working across the enterprise, with a focus on the future and not just the needs of today, isn’t neat, tidy, easy. It’s full of energy, friction, diverse perspectives, and often competing priorities and demands. It’s full of unknowns and unknowables, uncertainty and ambiguity, all in an increasingly time-pressured environment.

This way of working sets off a combination of ‘triggers’ deep in our human wiring that are guaranteed to bring out the ‘shadow sides ‘of our shared humanity unless we develop the muscles, minsets, and mental models required to access all its positive possibilities.

If we expect to operate together in this new collaborative way, it makes sense to develop it together as well; having a collective development experience that grows connection and capacity so that the value of the whole is greater than the sum of its parts.

Adaptive – Drawing on the work of Heifetz & Linksy (Harvard), our philosophy of being adaptive operates at both an individual level and a collective leadership level.

At an individual level, being adaptive means being self-aware, growth-centred, antifragile, and committed to learning, with all the personal leadership practices that requires. These include a commitment to holistic wellbeing, in order to have a deep well of personal capacity upon which to draw when things get tough. Because they always get tough.

At a collective leadership level, it means working together to tackle adaptive challenges in ways that enable a capacity to thrive. It means learning from the past, exploring possibilities, and experimenting with new ways of being. And it means doing all of this in situations and at times that bring with them stress, uncertainty, and the risk of failure.

Developing these capacities and capabilities isn’t a ‘one-and-done’ thing. It requires a sense of common purpose, a shared commitment to growth, long-term applied practice, and a willingness to let go and to be a beginner over and over and over again.

We are always changing, as is our context. Doing what we can to create that change in conscious and deliberate ways, rather than just react to it, is what makes the difference.

Up next...learn about our approach

Sign up for our Blacksmith Community update ‘From The Forge’ 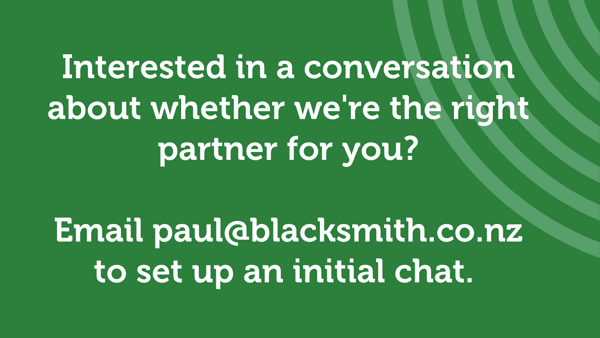